If anyone doubts that the Western world’s monetary order is rigged to enrich the banking system, the first quarter financial reports of America’s top banks should disabuse any unbelievers. The Financial Times reported that four of the five big U.S. trading banks had a combined revenue of $19.4 billion in the first quarter of 2015. […] 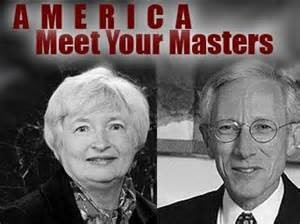 If anyone doubts that the Western world’s monetary order is rigged to enrich the banking system, the first quarter financial reports of America’s top banks should disabuse any unbelievers.

The enthusiastic coverage of the big banks healthy first quarter proceeds and the chest-thumping of its bank executives left out, not surprisingly, the real reason for their windfall gains – the Federal Reserve. The big banks have been the chief beneficiaries of the Fed’s easy monetary policy since the start of the financial crisis.

The Fed’s “zero interest rate policy” (ZIRP) and its “quantitative easing” (QE) program have been the catalyst for the large banks’ recent record performance. Ostensibly, these policies were instituted to assist the economy in its recovery from the Great Recession, however, in actuality they have been done to save the big banks from collapse while the economy has been flooded with billions of increasingly worthless dollars causing significant price inflation.

Low interest rates have enabled the banksters and financial houses to borrow at next to nothing and invest in all sorts of ventures, many of which are highly risky. Easy money is also the cause for the huge run up in assets prices and the highs in nominal stock prices.

While the big banks and Wall Street have done quite well from the Fed’s massive money printing, everyone else has suffered and have seen their standard of living plummet even from official estimates.

The Federal Reserve reported a slowdown in hiring in March, a big drop off in industrial production, and lower housing starts in the first quarter, to mention just a few troubling statistics. Things are getting to the point that the Fed is reconsidering whether it should raise interest rates in the second half of the year as it had hoped to do. Dennis Lockhart, president of the Federal Reserve Bank of Atlanta, admitted, “Data available for the first quarter of this year have been notably weak.”***

The first quarter sizable earnings of the big banks are an example of what a number of commentators have termed “crony capitalism.” Through government assistance, businesses earn wealth not by pleasing customers and satisfying their needs, but by currying favors from the state. In the banksters’ case, instead of making wise and prudent loans, they receive largesse in the form of billions of Federal Reserve notes.

Not only is such a system immoral, but it gives legitimate market activity – those firms that do not receive state assistance – a bad rap as profitable enterprises are lumped in with state favorites. This ultimately leads to greater regulation as calls for the government to tax “windfall profits” would affect all firms even those who earned rightful profits.

The solution to crony capitalism and the ill gotten gains of the banking system is not greater oversight, but instead, the abolition of the Federal Reserve and a return to sound money based on gold or silver. Under such a system, banks and financial houses would profit only if they satisfied consumers’ wants.

In the banks’ case, this would mean safeguarding depositors’ money and making prudent loans with the funds they were entrusted with to lend. For those financial institutions that succeed at such tasks, profits would be their reward; for those who do not and mismanage investment funds they would be out of business and allowed to fail. Banks would operate under the same economic laws as any other enterprise.

The prevailing system of crony capitalism which benefits the 1% must be exposed for the grand redistribution scheme that it has long been. Only when bankers earn their wealth as Main Street does will America return to a just and (sound) monetary order.