COURAGE “The kid had a 94-mile-per-hour fastball, a clean delivery, and a body that looked as if it had been created to wear a baseball uniform. He was, in short, precisely the kind of pitcher Billy thought he had trained his scouting department to avoid.” – Michael Lewis, Moneyball   In his book Moneyball, Michael […]

COURAGE
“The kid had a 94-mile-per-hour fastball, a clean delivery, and a body that looked as if it had been created to wear a baseball uniform. He was, in short, precisely the kind of pitcher Billy thought he had trained his scouting department to avoid.” – Michael Lewis, Moneyball

In his book Moneyball, Michael Lewis explores the irrationality and ignorance of human behavior and the opportunities it creates for those willing to resist it. The book represents a value investors guide to how the Oakland A’s, with one of the smallest budgets in Major League Baseball, consistently found and acquired quality players that were shunned under the traditional scouting matrix. These overlooked and undervalued players afforded the Oakland A’s and General Manager Billy Beane the fifth best winning percentage with the fourth lowest total payroll over the last 15 years. As the graph below from FiveThirtyEight shows, Beane dramatically outperformed his opponents when it came to maximizing the value of his budget. 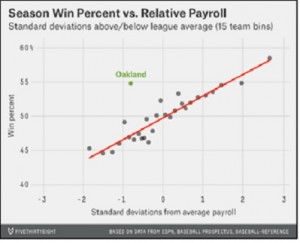 Once when asked why he was willing to allow Michael Lewis to write a book about his approach, Beane responded “It won’t matter who reads it, no one would have the courage to put into practice what we do.” This same model of logic and courage should be applied in investing.

In today’s euphoric markets we also believe it takes a lot of courage for those willing to underweight, sell or avoid U.S. stocks. Arguably, even more courage is required now than was required to buy stocks in March of 2009 when fear was running rampant and the stock markets were plummeting to levels last seen in the 1990’s. We realize that is a strong statement given how at ease investors are today compared to how scared they were in 2009. When one has enjoyed the benefits of a persistently rising market that has lasted many years, muscle memory makes changing a well-rewarded posture extremely difficult. This is especially true when the alternative, moving to cash, produces zero return. Conceptually, investing is a very simple task; buy when an asset is cheap and sell the asset when it is rich. Investors are psychological beings, however, and thus are subjected to more filters than a binary decision on whether an asset is a good buy or sell.

Cognitive dissonance is on full display today in the financial markets. The U.S. economy has been supported for seven years by a zero interest rate policy, record fiscal deficits and unprecedented surges in the money supply. Despite all of the stimuli, the economy is slogging along well below trend. The actions taken by the Federal Reserve, federal government and governments around the world are unprecedented. In a normally functioning economy such actions would generate massive growth and inflation. Since growth has been tepid and inflation benign, there is obviously something amiss.
Corporate earnings and thus stock prices are driven by the economy. Despite the state of the economy and economic concerns we harbor, investors are investing hand over fist in assets whose valuations are predicated on strong economic growth in the future. As a result, most major U.S. stock indices are currently at or near all-time highs. A sizeable percentage of the gains are a result of an expansion in the price/earnings multiple. In other words investors are willing to pay more today, than they did yesterday, for the same amount of historic earnings and or forecasted earnings. The graph below shows five popular gauges of valuation, including those used by the Federal Reserve and investing icon Warren Buffett. The colored circles show where the S&P 500 would be if investors valued earnings today as they did historically. Based on these five measures the S&P 500 is adding a 20% to 50% premium over what decades of history suggests is fair. These readings range from the 80th percentile to the 100th percentile in each case. Not unlike the rhetoric of the late 1990’s or mid-2000’s, there is no shortage of rationalizations for why such extraordinary valuations are reasonable and justifiable. Yet the fact remains firmly in place, stocks are expensive. 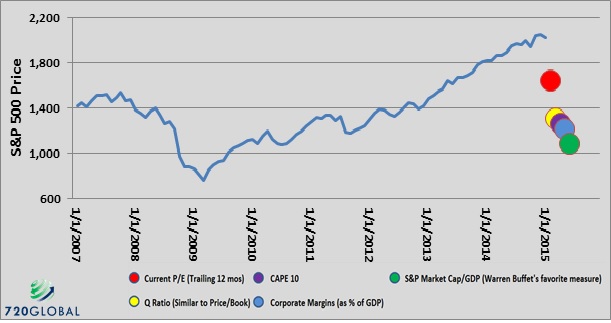 The all-important link between stock prices, economic and productivity growth, and true corporate earnings potential are being ignored. Stock prices and many other investment asset prices are indirectly supported by the actions and opinions of the central banks. Investors have become dangerously comfortable with this dubious arrangement despite the enormous market disequilibrium it is causing. History reminds us time and again that a state of disequilibrium is highly unstable and will ultimately revert back to equilibrium – often violently so.
Are investors ignoring economic warning signs that, at a minimum, should be causing trepidation? If so, then why are investors chasing stocks and other assets that are priced for something that seems unfeasible? One answer is certainly, in some part, attributed to the lack of safe alternatives offering reasonable yields. We argue there is more to consider. Investors are once again focused on the promise of an on-going rally in equities and other risky assets and a fear of being contrarian, while seemingly ignoring the facts. Cognitive dissonance has got the best of them.
Humans are not wired to take the road less traveled. They continually look for the safety and security that is provided by being a member of a larger group. Being part of the consensus crowd doesn’t mitigate the risk of loss or prevent failure, but it does go a long way to easing the mind and the wrath of clients, in the event of failure. Human beings tend to believe mistakes are valid if so many others make the same mistake. This herd mentality overrides rationality and common sense and changes the motives behind our decision making process. As investors demonstrate this phenomena, they end up harboring a greater concern of acting differently and lose focus of the risks they bear. The predominant difference on this occasion as compared with the two previous market bubbles (2000/2008) is the Federal Reserve’s role as an agent encouraging such reckless group-think.

This conflict, or cognitive dissonance, can be our nemesis when making investment decisions. As “rational” investors we need to overcome this handicap, even if it is easier said than done. Thoroughbred race horses occasionally wear blinkers so their focus is on the track in front of them and not on the horses around them. Our simple advice; wear blinkers. As difficult as it is, make intentional efforts to ignore the commonly uninformed chatter of friends and colleagues and the self-serving guidance offered by Wall Street economists and the media. Do your own homework and make sure your clients understand the value of your independent analysis.

Value investing, when done objectively, offers a strategy for investors to ignore the herd. The best in class understand that wealth is preserved by avoiding losses. They are not beholden to trends or momentum, nor are they distracted or obsessed by others investments. They simply have the courage to divest of or shun assets priced above fair value in the midst of euphoria. Although it seldom attracts the praises of the crowd, great investors who follow this simple courageous strategy do so with confidence in a favorable outcome.
“If everyone is thinking alike, then somebody isn’t thinking.” George S. Patton Jr.